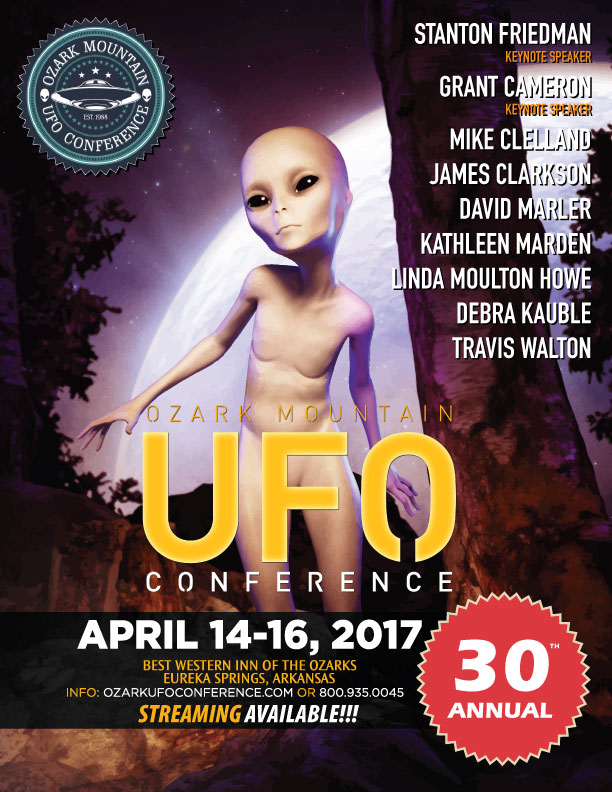 The 30th Annual Ozark Mountain UFO Conference, the oldest UFO conference in the U.S., will take place April 14-16, 2017 at the Best Western Inn of the Ozarks in Eureka Springs, a resort town in the Ozarks known both for its beauty and paranormal activity.

Since the late 1980’s, when the late Ufologist Lucius O. Farish founded the Ozark UFO Conference, it has been a gathering place for the top experts and investigators in the field of UFOs, Extraterrestrials, lost civilizations, crop circles and otherworldly phenomenon. In 2013, after Lucius O. Farish passed away, the late metaphysical author, researcher and pioneer in hypnosis and past life regression Dolores Cannon became director of the conference and renamed it the Ozark Mountain UFO Conference. Forrest Crawford, who has hosted the Ozark Mountain UFO Conference for many years, will return this year as Master of Ceremonies.

Day 1 of the 2017 Ozark Mountain UFO Conference kicks off on Friday, April 14 with Ufologist James E. Clarkson, who looks back 30 years over 700 UFO investigations from the Pacific Northwest where Kenneth Arnold first saw Flying Saucers over Mount Rainier in 1947, to present UFO REALITY FROM THE PACIFIC NORTHWEST – 30 YEARS OF INVESTIGATIONS.

Kathleen Marden, UFO researcher and niece of world famous alien abductees Betty and Barney Hill, will present EVIDENCE OF THE UFO COVER-UP BY GOVERNMENT AGENCIES, her unique look into the truth and fiction behind some the most compelling UFO cases on record.

Linda Moulton-Howe, longtime Ozark Mountain UFO Conference speaker and one of the world’s foremost UFO investigators, award-winning television producer and editor and reporter for Earthfiles News, will present IS OUR UNIVERSE SOMEONE ELSE’S COMPUTER SIMULATION?, which explores a reported claim by extraterrestrials visiting Earth that our universe is a 3-D hologram projected from another dimension by a Super Intelligence.

Keynote Speaker Grant Cameron will close Day 1 with his presentation THE PARANORMAL WORLD OF MUSIC, CREATIVITY AND ALIENS, which will take the audience through a series of stories and short videos showing where some of the great inventions, music and art really came from and the unbelievable connection between UFOs, aliens, and music.

On Day 2 of the Ozark Mountain UFO Conference, extraterrestrial contactee Debra Kauble, the subject of Budd Hopkins’s bestselling book, “Intruders: The Incredible Visitations at Copely Woods,” will present THE STORY OF THE INTRUDERS CONTINUES: 34 YEARS AND COUNTING, a lecture about the changes in her life since her incredible story of alien abduction that took place on June 30, 1983 was first made public.

Illustrator and UFO researcher Mike Clelland will then present OWLS AND UFO CONTACT, a wealth of first-hand accounts in which owls manifest in the highly charged moments that surround alien contact. From the mythic legends of our ancient past, to the first hand accounts of the UFO abductee, owls are playing some vital role.

David Marler, former Field Investigator, State Section Director, as well as Illinois State Director of MUFON, returns to the Ozark Mountain UFO Conference in 2017 to present THE BATTLE OF L.A. – UFO IN FEBRUARY 1942 – THE 75TH ANNIVERSARY, one of the most dramatic events in UFO history that was sighted by thousands of witnesses, tracked on radar, photographed by a member of the press and fired upon repeatedly by the United States military.

Keynote Speaker, nuclear physicist and world renowned UFO researcher, author and lecturer Stanton T. Friedman will close Day 2 by presenting FLYING SAUCERS AND SCIENCE, lecturing that the evidence is overwhelming that some UFOs are intelligently controlled extraterrestrial spacecraft, the subject represents a Cosmic Watergate and that the flying saucer reality and its cover-up is the biggest story of the past millennium.

The annual Speakers Dinner on the evening of Saturday, April 15 will provide a special opportunity to dine and mingle with all the speakers at the Ozark Mountain UFO Conference. The Lone Star Cash Bar will also be open each evening for attendees and speakers to gather and discuss groundbreaking theories about extraterrestrial life. Separate tickets to the Speakers Dinner are available on the Ozark Mountain UFO Conference website.

On Day 3, Travis Walton, the Arizona logger whose 1975 encounter with a UFO is the best documented case of alien contact ever recorded, will present FIRE IN THE SKY REVISTED, the final lecture of the 2017 Ozark Mountain UFO Conference.

All of the amazing speakers at the Ozark Mountain UFO Conference will then gather for our highly anticipated Speakers Panel, a fascinating discussion and Q&A session between the speakers and the audience.

The Ozark Mountain UFO Conference will wrap up on the afternoon of Sunday, April 16 with an annual drawing of door prizes that includes a Full 3 Day Pass to next year’s UFO Conference.

During the entire Ozark Mountain UFO Conference, our vendor area featuring a wide variety of books, handcrafted goods and metaphysical products including Aliens, ETs, UFOs, Tarot and more will be open to the public with free admission at the Inn of the Ozarks Convention Center.

We look forward to seeing you in Eureka Springs!

By madin|February 16th, 2017|Dolores Cannon, Extraterrestrials, UFO|Comments Off on The 30th Annual Ozark Mountain UFO Conference Returns To The Inn Of The Ozarks In Eureka Springs, Arkansas April 14-16, 2017